When it comes to how products are taxed, internet sellers have experienced a lot of change throughout the past several years. This article discusses how sales tax obligations impact eCommerce sellers’ businesses and will explain what businesses must do to stay in the good graces of state and local tax authorities.

Sales tax is tax on the consumption of goods or services. Sales tax is paid by consumers but collected by retailers, who hold it in trust until remitting it to the appropriate tax authority along with a sales tax return. People often talk about “internet sales tax” as if it’s unique—but it’s actually handled the same way as any other tax. However, tax on interstate sellers, including eCommerce sellers, has evolved a lot in recent years.

Before eCommerce existed, most interstate transactions were mail-order catalog sales. States only collected tax when catalogs sold items to customers living in a state where the seller had a physical location. North Dakota started to get frustrated by this setup because the state realized it was missing a lot of tax revenue. As a result, the state passed a law requiring all retailers that advertised to customers in North Dakota to pay sales tax—which targeted all popular catalog companies.

Not surprisingly, that legislation was met with resistance, and a big catalog company called Quill Corp refused to pay the tax. North Dakota sued the company, and the case eventually made its way to the Supreme Court. The court ruled in Quill's favor, stating that Quill did not have to pay the tax and that all companies must have a substantial physical presence in a state to be required to pay sales tax to state taxing authorities. Amazon saw this as an opportunity and began to build a tax-free online marketplace that consumers quickly embraced.

As eCommerce grew in popularity, states started getting impatient at all the money they couldn't collect tax on. In 2018, South Dakota sued online furniture retailer Wayfair, arguing that states should be able to collect tax on interstate sales in another case that made it to the Supreme Court. Ultimately, the Wayfair case overturned the Quill vs. North Dakota decision, replacing it with a ruling that opened the floodgates for states to collect tax from all sorts of businesses, regardless of physical presence.

The ruling in South Dakota vs. Wayfair, Inc. recognized that physical presence nexus by itself had become obsolete with the growth of internet businesses and sales. The ruling introduced the concept of economic nexus, which allowed states to collect sales tax on internet sales as long as sellers met certain thresholds. Not surprisingly, clothes states caught on and quickly introduced new economic nexus legislation of their own.

Within each taxing jurisdiction, tax authorities can dictate their own tax rates, product taxability rules, exemption regulations, and filing schedules.

Here’s what the sales tax legislation landscape looks like in 2022:

In total, there are more than 11,000 sales and use tax jurisdictions in the United States today, and it’s up to businesses to determine where they’re required to pay sales tax.

Whether a business sells directly to consumers (B2C) or sell to other businesses (B2B), it is subject to economic nexus tax obligations. However, taxes are handled differently for remote sellers and marketplace facilitators.

A remote seller is any person or business making sales into any state outside of their home state that does not have physical nexus in those states. This definition applies to any eCommerce seller that sells products from their own website or selling platform and ships them into other states. Remote sellers must be aware of when and where they trigger economic nexus and must collect and remit sales tax (Remote Seller Tax) to each nexus state to remain compliant.

This was a big win for small eCommerce sellers who found themselves facing a massive tax burden since the economic nexus was born. However, it's important that businesses know which category they fall into and are able to verify whether they responsible for anaging nexus obligations or if their marketplace facilitator platform handles tax compliance on its behalf.

How to Know Whether an eCommerce Sale Is Taxable

Businesses must consider two key things to determine whether a particular eCommerce sale is taxable.

eCommerce sellers must pay sales tax on internet transactions when:

The good news for small eCommerce sellers is that they have to reach a certain threshold, typically around $100,000 in sales or 200 transactions, to trigger economic nexus. If the business doesn’t do enough sales volume in a particular state to be held accountable for sales tax, it generally does not have to go through the process of registering, collecting, remitting, and reporting.

However, businesses should read legislation carefully and watch how states are using the words “and” and “or.” In some states, sellers must meet the economic threshold or the transaction count threshold. In others, sellers must meet both criteria (and) to trigger nexus. In some states, marketplace facilitator sales count toward threshold calculations, but in others, they are excluded.

Steps eCommerce Businesses Must Take to Be Sales Tax Compliant

Businesses that have significant sales volume each year and which sell outside of marketplace facilitator platforms may have unmet nexus obligations. Fill out this quick, no-cost compliance risk assessment to see where you stand. 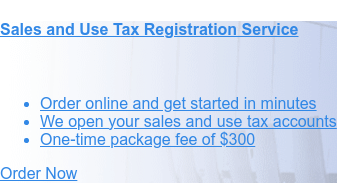